Recently I was inspired by the PixelCity series of articles. I was impressed what could be achieved by judicious application of basic OpenGL and some clever aesthetic decisions. I'm inspired enough to try the same thing, only with dungeons. My weapons of choice are pyglet and Python.

The first and most obvious thing to try was to generate a network of corridors. Here's what I ended up with. 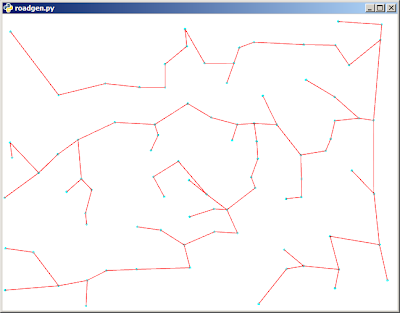 I generated this mainly by picking a point and then connecting it to one of it's closest neighbours. The points are initially distributed on a grid and peturbed by a random amount to make the layout less "manhattan" like. The order the points are picked in is related to the grid order, which is why you see a "spine" at the side of the dungeon. I thought this would make for interersting gameplay: monster - infested branches connected by a relatively safe trunk. So this is what I went with. In the next part, we will get some corridoor walls. Once I have a decent looking dungeon, I will release the source.

Posted by John Connors at 1:05 pm
Email ThisBlogThis!Share to TwitterShare to FacebookShare to Pinterest