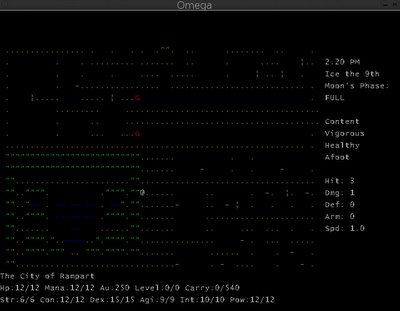 Curses is an ancient API for doing terminal I/O. SDL is a modern graphics library, nice and platform independent for talking to framebuffers, keyboards and other devices used in games. SDL_ttf is an extra library that lets you render TTF characters on an SDL framebuffer.

I've combined the three into one. I have a the beginnings of a curses-compatible library that renders to an SDL frambebuffer. It works well enough now for you to be able to play the Omega Roguelike in a window - see the screenshot. Hopefully it will become a way to rescue and make platform - independent old curses bound - apps. Expect it to hit Sourceforge in a few days.
Posted by John Connors at 10:10 pm
Email ThisBlogThis!Share to TwitterShare to FacebookShare to Pinterest

So what ever happened to this? I'm interested in using something like this to allow curses applications to run on the GP2X handheld. You can email me at plus DOT medic AT gmail DOT com